Christian and Muslim leaders agreed on Thursday to set up “rapid deployment teams” to try to defuse tensions when their faiths are invoked by conflicting parties in flash-points such as Nigeria, Iraq, Egypt or the Philippines. Meeting this week in Geneva, they agreed the world’s two biggest religions must take concrete steps to foster interfaith peace rather than let themselves be dragged into conflicts caused by political rivalries, oppression or injustice.

Among the organisations backing the plan were the World Council of Churches (WCC), which groups 349 different Christian churches around the world, and the Libyan-based World Islamic Call Society (WICS), a network with about 600 affiliated Muslim bodies. They would send Christian and Muslim experts to intervene on both sides in a religious conflict to calm tensions and clear up misunderstandings about the role of faith in the dispute.

“We call for the formation of a joint working group which can be mobilised whenever a crisis threatens to arise in which Christians and Muslims find themselves in conflict,” the leaders said in a statement after their four-day meeting. “Religion is often invoked in conflict creation, even when other factors, such as unfair resource allocation, oppression, occupation and injustice, are the real roots of conflict. We must find ways to disengage religion from such roles and reengage it towards conflict resolution and compassionate justice,” said the statement issued in Geneva. 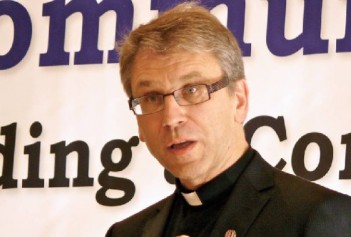 Jordan’s Royal Aal al-Bayt Institute for Islamic Thought and the Common Word group of Muslim scholars promoting interfaith dialogue also backed the plan, which the scholars have been discussing with several Christian churches for the past two years.

“Rapid deployment peace teams are clearly needed today in light of the tragic recent conflicts in Nigeria, Iraq, Egypt and the Philippines, to name only a few countries,” said Aref Ali Nayed, director of the Kalam Research and Media centre in Dubai.

Religious clashes are frequent where Nigeria’s Christian south and Muslim north meet. Sunday’s Baghdad church bloodbath that killed 52 worshippers and police was the worst Islamist attack on Christians in Iraq’s seven-year sectarian war. Egypt’s Coptic Christians say they face growing intolerance from the Muslim majority. In the southern Philippines, Muslim guerrillas have been fighting for four decades for a homeland separate from the majority Catholic country.

Nayed, who participated in the Geneva meeting, said small teams of Muslim and Christian experts would be chosen to fly into a conflict region based on the influence they could have on their coreligionists among the rival parties.

“If the Anglicans are strong in one country, we would send in Anglicans. If Catholics are strong in another country, we’ll send in Catholics,” he said. Muslims would also be chosen for the links they might have with the local Islamic community. On-the-ground support for these missions would come from the WCC, which groups most non-Catholic Christian churches around the world, and the WICS, which has extensive contacts in Africa and Asia. 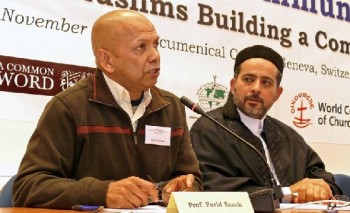 The meeting condemned Sunday’s attack on the Baghdad church, saying it “contradicts all religious teachings” and “aimed at degrading Iraqi people, regardless of their religious affiliation, and defiling Christian and Islamic sacred places.”

The meeting’s final declaration said the Christian and Muslim organisations agreed to “counter discrimination, abuse of laws and unjust legal restrictions on matters related to religious identity” and refuse “to allow religious or spiritual authority to justify discrimination and exclusion.”

It called for “relevant and balanced education about the religion of ‘the other’ at all levels and in appropriate formats, in curricula and text books and the training of religious and community leaders, teachers, lecturers and researchers, ideally provided by an adherent of that religion.” That would include “an interfaith resource book and joint teaching tools on Islam and Christianity for the use of religious teachers, imams and clergy, and their translation and dissemination worldwide.”