Prominent Muslim scholars have recast a famous medieval fatwa on jihad, arguing the religious edict radical Islamists often cite to justify killing cannot be used in a globalized world that respects faith and civil rights. A conference in Mardin in southeastern Turkey declared the fatwa by 14th century scholar Ibn Taymiyya rules out militant violence and the medieval Muslim division of the world into a “house of Islam” and “house of unbelief” no longer applies.

Osama bin Laden has quoted Ibn Taymiyya’s “Mardin fatwa” repeatedly in his calls for Muslims to overthrow the Saudi monarchy and wage jihad against the United States.

Referring to that historic document, the weekend conference said: “Anyone who seeks support from this fatwa for killing Muslims or non-Muslims has erred in his interpretation. “It is not for a Muslim individual or a Muslim group to announce and declare war or engage in combative jihad... on their own,” said the declaration. Click here for my full report on it.

The declaration is the latest bid by mainstream scholars to use age-old Muslim texts to refute current-day religious arguments by Islamist groups. A leading Pakistani scholar issued a 600-page fatwa against terrorism in London early this month. Another declaration in Dubai this month challenged the religious justification for violence used by Islamist rebels in Somalia and calling for peace and reconciliation there (more on that here).

Fatwas may not convince militants, but they can help keep undecided Muslims from supporting them, the scholars say. Because Islam has no central authority to define the faith in all its details, militants who hijack it by twisting texts for their own purposes need to be confronted by moderates who cite chapter and verse to refute them.

Outside the Muslim world, declarations like these risk the fate of trees that fall in the forest when nobody’s listening. This conference was held in Mardin, a medieval town near the Syrian border, and the media present were mostly Turkish and Arabic speakers. It got good coverage in the Turkish press and Al-Jazeera television ran extensive footage in Arabic. But getting the message out to the rest of the world, including the majority of Muslim who speak neither Arabic nor Turkish, means getting it out in English.

Mustafa Akyol, an known to readers of this blog, was there writing in English for the Hürriyet Daily News. And one of the main speakers was Aref Ali Nayed, another name regular Faith World readers will recognise, whose Kalam Research & Media theological think tank provided the quick English translation of the final declaration. They helped complement the basic information provided by the conference organisers.

Akyol explained the significance of Ibn Taymiyya’s famous fatwa like this:

“The way Ibn Taymiyya denounced the Mongol rulers of his time, who claimed to be Muslim but fell short of implementing the Islamic Shariah, has provided justification for some radical groups to denounce Muslims they view as less strict as ‘apostates’. 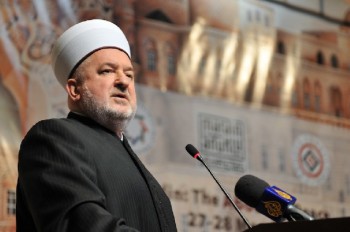 “The jurist’s division of the world into the ‘Abode of Islam’ and the ‘Abode of War’ – and his view that a place is not really a part of former unless it implements Shariah – have also inspired fundamentalists dedicated to establishing ‘Islamic states’ in predominantly Muslim countries.”

He also quoted Mustafa Ceric, the grand mufti of Bosnia, on the conference theme of the need for a new interpretation of old texts. “Most ulema [Islamic scholars] have a problem,” he said. “They know the classical texts very well, but they don’t know the contemporary world that much.” During Ibn Taymiyya’s time, there was no concept of international law based on human rights.

“Today the world is so different. The Bosnian Muslims who took refuge in European countries such as Sweden found there the rights and privileges that they would not exactly find in Muslim countries... There is no such thing as an Islamic state. There are only states that provide justice, freedom and security and those that do not.”

Nayed, who like Ceric is a leading voice in the Common Word group for Muslim-Christian dialogue, developed this theme of the new world context for Islam in his address “Duties of Proximity: Towards a Theology of Neighbourliness” (PDF here). It ’s an eloquent refutation to militants who dream of Islamising western countries or recreating a caliphate: “Islam must never be conceived of merely geographically, because it is beyond geography... We must never reduce the abode of peace to a worldly dar al-Islam, conceived of as merely a geographically distinct empire or state.”

Rather than vilifying life in the West, Nayed said, Muslims must realise that “it is a fact that today many liberal environments are actually more conducive to Muslim living and worshiping than many so-called ‘Muslim countries’. As a matter of fact many Muslims today are actually forced to move to non-Muslim countries because of political or economic insecurity. At least up to 9/11, and in many places, even after it, many ‘non-Muslim’ countries fare quite better than many so-called ‘Muslim countries’, and even ‘Muslim states’, in allowing Muslim living.”

“We must not see secular liberalism as hostile to Islam. We must help secularisms mature to become more and more accepting of religious values in life. Much has been lost because of the lumping together of all sorts of secularism under the negative generic rubric of ‘almaniyya’ (Arabic for secularism). A great deal of discernment and wisdom is called for in this regard.”

What do you think of this declaration? Will it make a difference?