Pope Benedict XVI called for the establishment of an independent Palestinian homeland immediately after he arrived in Israel Monday, a stance that could put him at odds with his hosts on a trip aimed at easing strains between the Vatican and Jews.

The pope also took on the delicate issue of the Holocaust, pledging to “honor the memory” of the 6 million Jewish victims of the Nazi genocide at the start of his five-day visit to Israel and the Palestinian territories.

Benedict urged Israelis and Palestinians to “explore every possible avenue” to resolve their differences in remarks at the airport after he landed.

“The hopes of countless men, women and children for a more secure and stable future depend on the outcome of negotiations for peace,” he said. “In union with people of good will everywhere, I plead with all those responsible to explore every possible avenue in the search for a just resolution of the outstanding difficulties, so that both peoples may live in peace in a homeland of their own within secure and internationally recognized borders.”

While Benedict’s support for a Palestinian homeland alongside Israel is widely shared by the international community, including the United States, it was noteworthy that he made the call in his first public appearance.

[Israeli Prime Minister Benjamin Netanyahu, leader of the hard-line Likud Party, has pointedly refused to endorse the two-state solution since his election. But he is expected to come under pressure to do so when he travels to Washington next week.]

The pope has tried to improve interfaith relations throughout his four-year papacy. But Benedict has had to tread carefully on his Middle East visit after coming under sharp criticism from both Muslims and Jews for past statements. He is hoping his weeklong trip to the Holy Land, which began with three days in neighboring Jordan, will improve interfaith ties.

The Vatican has called his trip to the Middle East a journey of hope and faith. But what Benedict’s encountering in this part of the world, said CBS News correspondent Richard Roth, is more like opportunity and risk. Plenty of both lie ahead. 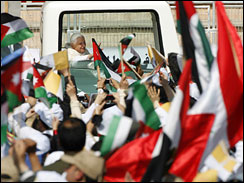 (AP Photo/Pier Paolo Cito)
(Left: Pope Benedict XVI is greeted as he arrives at the International Stadium of Amman to celebrate a Holy Mass, Sunday, May 10, 2009.)

Benedict infuriated many Jews by recently welcoming back to the Church a bishop who denies the Holocaust took place.

The Vatican has come under widespread criticism over the years for not doing enough to stop the genocide – a charge it rejects. And the German-born pope himself has faced questions for his involvement in the Hitler Youth corps during the war. Benedict says he was coerced. The pope also outraged Jews earlier this year when he revoked the excommunication of an ultraconservative bishop who denies the Holocaust.

“It is right and fitting that, during my stay in Israel, I will have the opportunity to honor the memory of the 6 million Jewish victims of the Shoah,” he said, using the Hebrew word for the Holocaust. He said he would “pray that humanity will never again witness a crime of such magnitude.”

To some survivors, it’s an important gesture – especially from a pope who is German.

“I’m very glad that he is coming to Israel, to Jerusalem, to Yad Vashem, that he is speaking there and thus is recognizing the fact that the Shoah is a major event in Jewish life,” said Holocaust researcher Sergio Minerbi.

Dignitaries and religious leaders greeted the pontiff at a red-carpet ceremony at the Tel Aviv airport. Yellow and white Vatican flags fluttered alongside blue and white Israeli banners as an honor guard played in the background.

The pope smiled as he walked along the carpet, flanked by Israeli President Shimon Peres on one side and Netanyahu on the other. Other political leaders, along with black-robed Christian clergymen and Muslim religious leaders, stood in line to shake his hand.

“Your visit here brings a blessed understanding between religions and spreads peace near and far. Historic Israel and the renewed Israel together welcome your arrival as paving the great road to peace,” Peres said.

The pope plans to visit holy sites in both Israel and the Palestinian territories. He also will try to draw attention to the shrinking Christian community in the Holy Land.

In Jordan, he said he had a “deep respect” for Islam and toured the country’s largest mosque, where he did not pray but had a moment of reflection. 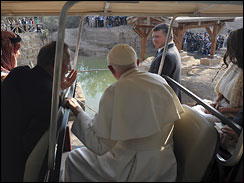 His host thanked Benedict for expressing regret over remarks he made in 2006 that angered many in the Muslim world, when he quoted a Medieval text that characterized some of Islam’s Prophet Muhammad’s teachings as “evil and inhuman,” particularly “his command to spread by the sword the faith. He later expressed regret that his comments offended Muslims.

Here the pope stressed he has “deep respect” for Islam. At the same time he denounced what he called the “manipulation of religion” for political purposes, that’s led to violence.

Celebrating mass at a soccer stadium in Amman Sunday, Pope Benedict acknowledged the hardship faced by his followers here. He urged them to hold on to their faith.

“The Catholic community here is deeply touched by the difficulties and uncertainties which affect the people of the Middle East,” he said.

Before heading to Israel, Benedict urged Christians and Muslims at a farewell ceremony in Jordan to work for religious tolerance. He said his visit to a Jordan’s largest mosque was one of the highlights so far of his first Middle East pilgrimage.

“I would like to encourage all Jordanians, whether Christian or Muslim to build on the firm foundations of religious tolerance that enable the members of different communities to live together in peace and mutual respect,” Benedict said.

During his three days in Jordan, the pope said he hoped the Catholic Church could be a force for peace in the region.

© MMIX, CBS Interactive Inc. All Rights Reserved. This material may not be published, broadcast, rewritten, or redistributed. The Associated Press contributed to this report.