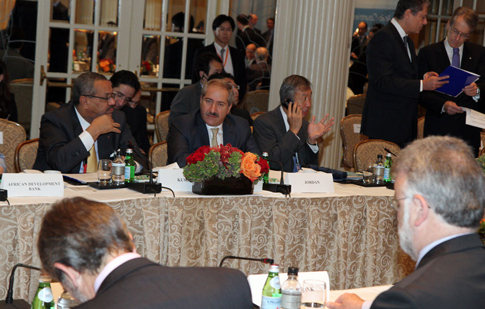 AMMAN — Religious tolerance and interfaith dialogue have always been two of the fundamental pillars of Jordan, Foreign Minister Nasser Judeh said on Thursday.

At a discussion on civil society and human rights education as tools for promoting religious tolerance, which he co-chaired with Italian Foreign Minister Giulio Terzi on the sidelines of the 67th UN General Assembly in New York, Judeh outlined Jordan’s efforts to preserve human dignity and renounce violence, extremism and hatred, the Jordan News Agency, Petra, reported.

He cited the Amman Message and the Common Word initiative, which aim to clarify the true image of Islam and its teachings as a faith promoting moderation, tolerance and acceptance.

Judeh also referred to World Interfaith Harmony Week, observed each February, which was first proposed by His Majesty King Abdullah at the UN General Assembly in September 2010.

The foreign minister highlighted the need for concerted efforts to confront racial discrimination.

At a joint press conference with Terzi, Judeh stressed the importance of respecting all religions, noting that any kind of insult against any religion is completely unacceptable, Petra reported.

Terzi announced that his country will host a conference on religious tolerance and dialogue early next year.

Also on Thursday, Judeh participated in the fourth meeting for the Friends of Yemen Group, which was held with the participation of several countries, and regional and international organisations.

In remarks during the session, he stressed Jordan’s support for Yemen in resisting any attempts to destabilise the country and disrupt its political transition.

In addition, the foreign minister met with his Danish and Swiss counterparts on Thursday and discussed bilateral ties, regional developments and the peace process, according to Petra.

On Saturday, Petra reported, Judeh attended the Deauville Partnership meeting on the sidelines of the General Assembly session, during which he touted the steps Jordan has taken towards reform since even before the start of the Arab Spring.

The Deauville Partnership was launched by the G-8 last year to assist countries in the Middle East and North Africa that are going through democratic transitions.

Also on Saturday, Judeh attended the Friends of Syria meeting, where he underlined that the tragic situation in Syria necessitates an immediate halt to violence.